Troubadours of the desert – Jaisalmer

Coincidence is the engine of each adventure. Helmut, an Austrian adventurer I met in Jaisalmer, knows this as no other. At one point in his life, he decided that it was a good idea to take the oldest and cheapest car he could find (8 horsepower) and drive it from Sri Lanka back to Austria. Naturally, he had to dodge any hill that had a slope of more than 5%. This is how he one day found himself in Jaisalmer where coincidence and the desert’s sand made his car brake down right in the middle of some local musicians. Although they most likely didn’t have a song for this particular occasion, they seemed knowledgeable and helped Helmut to find a mechanic. By the time his car was fixed, Helmut’s love for the region and the people had set in motion the events that would change his life. When he got back in Austria, he sold his house and travelled straight back to his friends in Jaisalmer, where he started Artist Hotel. A place to benefit the nomadic musicians who settled here after modernity caught up with their life-style.

The golden city in Rajasthan, Jaisalmer, gets its name from the yellow sandstone by which its giant fort stands out from the desert surrounding it. Highlight in this outpost of the Thar desert is a camel ride through the sand dunes and harsh surroundings that make up the dry border-area of India and Pakistan. When I decided to take a trip for a few days on a camel called Papaya, I realized that traveling through this harsh surroundings (these days filled with windmills) must have been no regular picnic. The troubadours of the desert had the important task of spreading the knowledge which would give people the best chances of survival. While entertaining the people, they educated. By passing it on within their cast, they became a living library of ancient knowledge. Now this cultural heritage is slowly diminishing, if not for the efforts of people like Helmut with places like ‘Artist Hotel’. 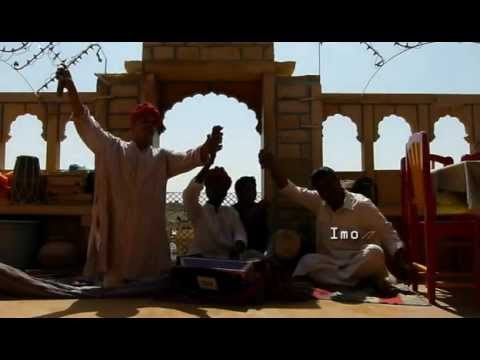 The song sang in the video is about how a peacock can predict that you are about to get soaking wet. Just so you know! Contact the Artist Hotel via their website. Lonely Planet review here. Profits go to local educational projects, ad hoc caretaking (e.g. blankets in the winter) and giving the musicians a stage to perform.