Diwali is the festival of lights, India’s most important holiday. Like any other festival, when the Indians celebrate, they mean business. Not only literally (on the first day of Diwali all businesses start their financial year), but mainly just by taking it into the extreme. Imagine a combination between Christmass and new years, multiply it by three and add India in the equation and you get what I found in Udaipur, the last city I visited in Rajasthan. Lighted plastick palmtrees, beard competitions, foodstalls, sweets and a lot of fireworks, all under a roof of glittering and gleaming decorations, makes the scene of Indian families visiting their relatives. Since I had no relatives in Udaipur, I decided to start searching for talent. As Udaipur is also known as one of the most romantic cities in India, my quest was aimed for creative expression with love as inspiration.

Meet Sharmila Rathore. There are a few galleries in Udaipur with nice art, but most of them sell more or less copies of the traditional miniature-paintings that you can find anywhere in Rajasthan. Sharmila’s ‘Art Issue’ drew my attention because she makes a fusion between contemporary and traditional art. Next to that, she also has a noticeable style that seems to speak directly from the hart. Her paintings are inspirational, spiritual and what’s more: the subject of many of her paintings… is love! 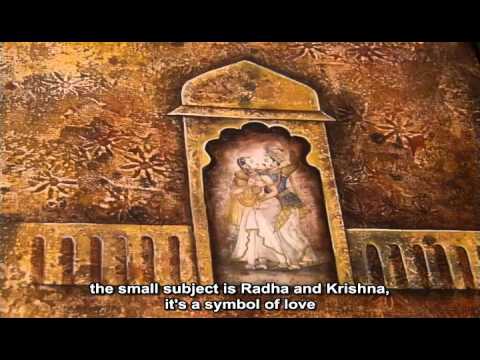 It was the first day of Diwali when I took this video, but fortunately the firecracker war outside had reached some kind of temporary truce. Shariq Parvez, the musician in this video, finds that a temporary truce is sometimes difficult to negotiate when you have two young kids roaming the house. ‘And I do meditations!’. Fortunately we could make this recording in an unguarded moment at his home in Udaipur. Shariq gives meditation classes with his own made Meditation Guitar, a fusion between the slide guitar and the traditional Indian Sarod. Visit www.meditationguitar.in for more information. Contact the GTP to get in touch with Sharmila!

It wasn’t easy getting into Ladakh in the North of India. First I tried my luck on the infamous Manali-Leh road. But crossing the himalaya’s in the rain, dodging landslides, didn’t really seem appealing. Especially when in the days that I tried one bus and two shuttles went down causing 24 deaths. It took me almost a month to finally get there via the alternative Kashmir-Ladakh road, but the reward was astaunishing. I arrived in Leh right in the middle of its annual festival and was pleasantly surprised by its grandeur. Ladakh is as close to Tibet (culturally, spiritually and physically) as it gets and driving through the area, one does not have to think hard to determine its dominant religion. My guidebook told me about Ladakh’s history of women emancipation, so I figured it would not be too challenging to find talent of the female gender…

Dechen Dolma is a very special talent. Not only is she very gifted in making clay-sculptures, she chose to do it in spite of misgivings from her surroundings. Her world-famous teacher, master Nawang Tsering, created the Maitreya Buddha, amongst many others and considers Dechen one of his most talented students. 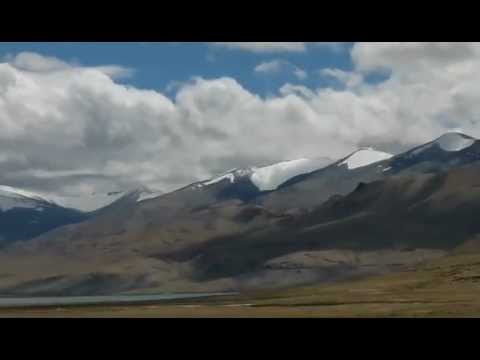 The song played in the video is roughly translated in ‘the talent-song’. The full version can be found here.

Unfortunately, the magnificence of Ladakh is not visible for everybody. Searching for talented musicians, I stumbled upon Thukjey Dolma (not related to Dechen). Thukjey was born blind in one of the most beautiful places on earth. She is a very bright spirit nonetheless and her positive energy brought me to visit a very interesting school, Secmol, on which she teaches music. After she sang on the local radio, her star rose in Leh and when I met her in a local restaurant, the Indian phone-camera’s for once where not pointed at me, but at my blind companion! Rohan Dhar, a volunteer at the Secmol school, kindly accompanied Dechen in this performance.

Both Dechen as Thukjey can be contacted when you find yourself in Leh.

Madan Shrestha – A ‘Moment of life’ in Nepal

‘It takes a crane to build a crane’… (Jason Mraz in his song: ‘Life is wonderful’) Life certainly is wonderful in Nepal, or at least: if you know where to look! Madan Shrestha knows this very well and has both a talented eye as a talented hand when it comes to painting the moments of life that make Nepal such a unique country. Being only 22 (1989), Madan is a remarkable talent. He is part of a group of upcoming artists, schooled in the school of arts in Kathmandu. In Madan Shrestha’s case, it takes an artist to make an artist. Not only did he become passionate about art because of his teacher when he was a little boy, he now also shares this passion with the vast amount of children that he teaches in school.

When I met Madan, he had just finished a very successful first solo-exhibition in Kathmandu called ‘moment of life’. I couldn’t wish for a better moment to help Madan with more digital promotion. It should be noted that Madan considers himself to be in the experimental faze of his painting-career and that he will experiment further with different styles and materials. One thing is very clear however. Madan is very much inspired by everyday life in Nepal and how it relates to Nepalese natural beauty. I, for one, am very interested in where his creative career will lead him. For the Global Talent Project (and because my knowledge of the Nepales language is limited to ‘namaste’), Madan bravely talked with me in English. 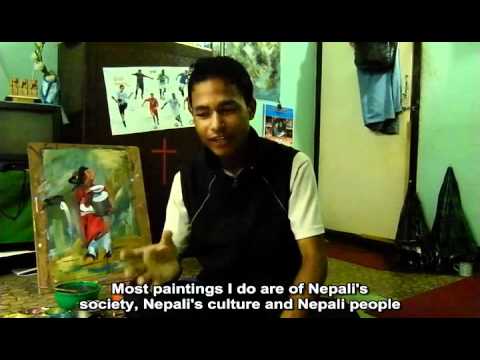 Music by Kutumba, a very popular Nepalese band, that I had the fortune to visit when they where practising. The full version of the music in this video can be found here.

Madan’s art has mostly been sold, so this time it will not be possible to buy his art via the GTP. If you are interested in contacting him however, you can contact the GTP for his details. More photo’s of his work here.