« Sikh upcoming artist in Amritsar
Troubadours of the desert – Jaisalmer »

How do you find the talents? It’s one of the most asked questions people ask me about the project. It’s always different and that’s what makes it so interesting. My time in Kashmir was definitely different… I arrived in the middle of Ramadan and celebrated AID (the end of it) with the local sufi-muslims. It turned out to be a very welcoming and open atmosphere in one of the most disputed areas of the world. Since I had seen Kashmir-shops all over India, I was anxious to see where these products came from. Especially the Kashmir shawls drew my attention. Since everybody I talked to seemed to be of the male-gender, I decided to search for a women’s group. Surely this wouldn’t be too hard?

A full week I stayed in Shrinagar, asking anyone that would listen where I could find a group of independent women that make Kashmir shawls. Nobody knew. Or if they knew and enthusiastically told me ‘sure, no problem!’, the shrewd Kashmiri businessmen would follow that sentence with a ‘so what will you pay me for that information?’. Youssef, owner of my regular restaurant, shook his head sympathetically each time he saw me coming back empty handed. Eventually one day he came up to me and told me for Allah’s sake to go to the local television studio. ‘They are educated people, there they will help you.’ Figuring I didn’t really have any alternatives, I decided to follow his advice.

My first attempt to get in failed miserably (‘no sir, security problem sir’). Being Kashmir’s voice to the world, the television station (Durdarshan), is one of the most guarded and well-defended buildings in India. The next day however, I met a more willing attendant and after some phone calls, some questions and a lot of waiting I could go through the multiple military check posts to visit the head of operations personally. I was pleased to see that the Durdarshan director turned out to be a woman. She immediately decided to help me and pulled some strings to find me my women’s group. In fact, she liked the idea so much, that she decided to make an item of it herself and consequently sent a whole television crew with me! Deep into the Kashmiri valley of paradise I eventually found what I was looking for: an independent women’s group making Kashmir shawls: Wani’s self-help group! 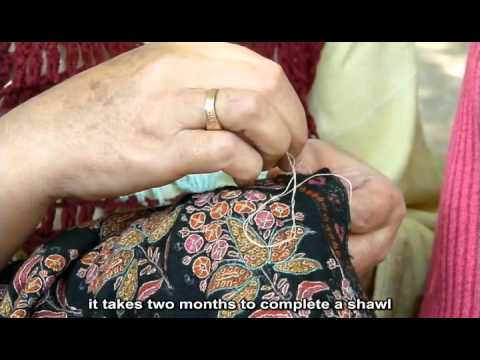 The Sufyana music performed in the video was done by Mohammed Yaqoob Sheikh & Party. Their group is a well known performer of Sufyana music and is one of the only professional groups in Kashmir that consists mostly of women (albeit, being led by a man). Like with the women’s self help group, the Durdarshan director also assisted in arranging this music-performance in her studio.

To get in contact with Wani might be challenging. None in her group speaks English. If interested however, the contact details of the government official that helped funding their group are available by contacting the GTP. The same goes for Mohammed Yaqoob!

This entry was posted by Elmar Haker on 2 November 2011 at 06:53, and is filed under talentblog. Follow any responses to this post through RSS 2.0. Both comments and pings are currently closed.